THE NINE PHASES OF MARRIAGE: How To Make It, Break it, Keep It by Susan Shapiro Barash 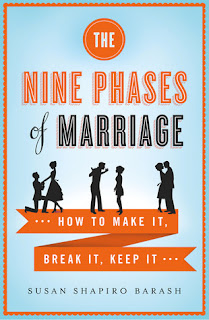 
"Marriage, the last vestige of Church and State, is the testimony to our commitment to each other and the culmination of profound love." Or is it?


THE NINE PHASES OF MARRIAGE: How To Make It, Break It, Keep It by Susan Shapiro Barash

Do marriages come with an expiration date? Is the holy matrimony the obvious and safe choice it used to be in the past or a terminable institution?
After all, we live in an age that allows women, more than ever before, to live a purposeful life and reinvent themselves after a failed marriage, through their careers, a first if not second college degree, social media, or with the aid of a look makeover and beauty treatments. The lives of those women who embrace 'singlehood', by choice or circumstance, are replete with alternatives. According to the statistics, though, for the vast majority of the American female population 'love-ever-after' is still the ultimate goal of a lifetime. And even when the first go at that 'endless love' fails, a second or third chance at wifedom is still regarded as more acceptable than life as a single.
The twenty-first century woman may have revised her priorities and finally accepted the idea that a failed marriage is not an indication of personal failure or loss of identity, but the security and validation provided by the status of 'wife' have long legs. Despite the gender emancipation and empowerment achieved over the last fifty years, women are driven by unconscious motivations, biological needs, and century-old expectations: either for its emotional and spiritual appeal, or for purely practical reasons, the marital institution still represents a safe choice and a hot commodity. Women enter the marriage arena with relentless optimism, but they will ultimately find it hard, unsatisfactory, below their expectations. In this light, it doesn't surprise  that women are more inclined than man (66% of divorce actions are initiated by women) to file for divorce.
What is it about marriage then, that makes it so desirable? Do wives have unrealistic expectations? Do they have the skills and the understanding necessary to make it work? Why do some women qualify for the role of 'perfect wives' and some others don't, and yet they don't give up on their dream of being happily married ever after?
To answer these questions, gender and relationship expert Susan Shapiro Barash interviewed hundreds of women from diverse age groups and walks of life, and came to the conclusion that, whether in a traditional, childless or child-centered marriage, newly wed or widow, divorcee at her second or third experience, all husband-wife relationships have common denominators and patterns that every woman needs to identify and understand in order to better bond with her partner, recalibrate her marriage or invest in a new relationship with an improved self-awareness. According to Shapiro's study, all marriages go through a progression of nine phases and fluctuating emotional waves, and while wives still play a role that abides by old Victorian rules (a focus on the care of the 'family nest', children rearing and education, protection of the 'family brand' and social organization), the cultural shifts of our century, economic downturn and new societal requirements add to the complexity of an already tricky business.
The strongest message delivered by the relationship expert is to avoid (while facing the marriage challenges) that negative attitude that blocks a couple's repair mechanisms. Marriages can succeed in spite of all the doubts and tensions emerging throughout some of its stages, only if emotional honesty, communication, meaningful confrontations, mutual understanding and respect in matter of financial responsabilities and housekeeping, shared vision in children's upbringing, commitment to seeking romance and intimacy are kept at all times.
Whether you are about to embark on your first relationship, or you are in a marriage that is not providing the emotional gratification you anticipated, or you are looking at your failed marriage in retrospect trying to wise up for the next one, The Nine Phases Of Marriage: How To Make It, Break It, Keep It , with its wide-scope exploration and  terse examination of an institution that is striving between old formulas and new expectations, provides an insightful guide to self-reflection and emotional clarity.

*Review copy graciously offered by the publicist in return of an unbiased opinion.
Posted by Mina at 12:40 PM