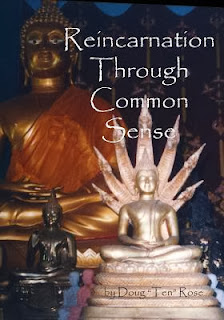 Imagine a place where silence hears your words, simplicity is a treasured blessing, respect is a way of life. This is the description of a physical place, a Buddhist temple in Southeastern Asia more precisely, but it could be a place within ourselves...if only we learned to master reincarnation through common sense.

The Dalai Lama once said, "Nirvana may be the final object of attainment, but at the moment, it is difficult to reach. Thus the practical and realistic aim is compassion, a warm heart, serving other people, helping others, respecting others, being less selfish." The concept of reincarnation as the migration and rebirth of a soul (spirit, consciousness, you name it) into a new body after its biological death is by far the most popular Buddhist belief, but it may not be all. 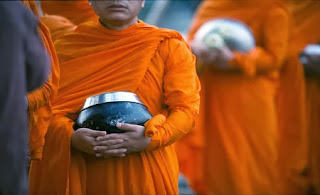 Buddha's less known understanding of reincarnation as a daily spiritual renovation is even more important in the service of a life improvement. In this light, that mystical force we usually identify as karma becomes part of a natural law where individuals are not influenced by it. On the contrary, individuals govern it and shape it through conscious actions (or non-actions) and subsequent reactions. Rebirth should rather be a reformation of our present life, a reincarnation of our mind: we create karma every time we think and act. It won't be necessary to radically overturn your religious beliefs in order to understand and embrace this kind of knowledge. A constructive philosophy can easily harmonize with our spiritual inclinations, whether mystical or agnostic. The "daily-use reincarnation", in fact, shows strong similarities to the cornerstone principle of re-birth through Baptism, but while the Christian sacrament is a one-time ritual, Buddhism  fosters kindness, happiness, and good health by practicing rebirth in our daily thoughts and actions.

Crafted as a riveting memoir, Reincarnation Through Common Sense follows Doug Ten Rose's  spiritual path to re-birth and pays an homage to those special human beings, the 'Wisdom Professionals', who held his hand throughout his journey and awakening: monks and nuns who, simply out of unconditional love for the entire universe, help broken souls to heal and become whole again. Valuable food for thought, Ten's personal journal is a perfect inspirational mantra. I have savored his honest and engaging narrative for a few days, with my morning coffee and bedtime meditation. I will treasure his gems of philosophical wisdom: they come from a modern day Lazarus and delightful narrator, a man who traveled on some difficult roads (read my review of Fearless Puppy On American Road), hit rock bottom and came back, reborn.

I would like to thank the author for the review copy he generously offered in return for an unbiased opinion. Every time you purchase Doug Ten Rose's books, you support and sponsor emotional and spiritual intelligence. All proceeds from book sales will benefit Buddhist monks and their charitable projects.

Cover blurb
Albert Einstein said, "Once you accept the universe as being something expanding into an infinite nothing which is something, wearing stripes with plaid is easy." Reincarnation Through Common Sense is a book of stripes and plaid in the most entertaining sense of Einstein's words. Westerners have written many books about living in Asian temples. None are like this true story. The rural Buddhist Monks and Nuns of a forest temple in Asia adopt a troubled traveler from Brooklyn, New York. He can't speak the language. No one there speaks English. He is penniless, with no ticket home. He is also very hung over, slightly suicidal, amusingly psychotic, and has no intention of studying spiritual discipline. This author is not a theology student! He is nonetheless given access to the ancient roots and spiritual wings of the Wisdom Professionals who rescue him. He redefines life and reports the details to us in a manner so intimate and natural that you'll think you are having coffee on a bar stool in the temple with him. You may laugh a lot on your way to Nirvana. You may say "Ouch!" a few times, too.

Photo Credits: Google.com
Posted by Mina at 11:33 AM