BETWEEN THE TIDES by Susannah Marren (A Review)

"What does it cost an intelligent, creative woman to give up the life she has made for herself to follow her husband and his career into the heart of the American dream? And what dark secrets may lurk, concealed behind the scenes of that affluent picture-perfect suburb where every man is a success and every woman seems to be a beautiful winner at the game of life?" -- Leslie Bennetts, New York Times bestselling author of The Feminine Mistake 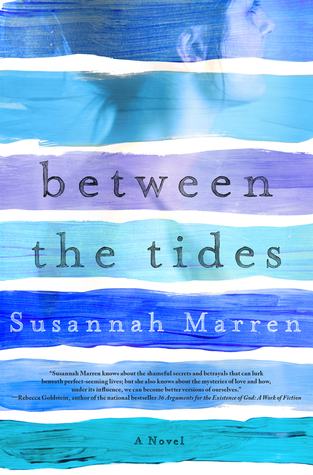 BETWEEN THE TIDES
by
Susannah Marren
St. Martin's Press, July 2015
Hardback , 292 pages
Women's Fiction
Add it on Goodreads
Buy it on Amazon

In Northern European folklore, selkies are said to be mythological creatures, half human half seal. Legend has it that they live in the frigid waters of the Norwegian Sea and occasionally shed their skin to become human and live on land. If a man steals a female selkie's coat, she is in his power and she is forced to marry him, helpless and unable to shift back to her real nature. Selkies make excellent wives and devoted mothers, but because their element is the ocean they will keep longing for it: once they retrieve the seal skin, these water creatures return to their true home, even if that means leaving their beloved children behind.

The many versions of this shape-shifter folktale (myths of mermaids, swan maidens, and doves are spread around the world) are typically romantic tragedies but they hold a much more complex and atavistic cultural subtext: marriage as loss of identity, marriage as a deceit, marriage as a social compromise that historically, and still to this day, penalizes women as the weaker subject of the relationship bargain. Between the Tides can be considered a new rendition of such a tragic tale as it offers a modern-day, true-to-life take on that elemental tale of loss and self-sacrifice. Conceived by the fluid imagination of a gender and relationship expert (Susannah Marren is the pen name of Susan Shapiro Barash, author of The Nine Phases Of Marriage), Between The Tides adheres to the basic plot of the Nordic legend, strips it of its magical folklore while retaining its cultural symbolism. In Marren's deft hands, the selkie becomes  a Manhattan upper middle class wife and mother, beautiful and ethereal, with an obsessive love for water and art inspired by the sea. The ocean, the beach, the jetties are her element. Her paintings are her selkie skin, her way to freedom, and yet she slowly and unredeemable shrinks under the pressure of the man she loves, and she will leave her world behind, without a compass or a guarantee she will ever get back.

Lainie Smith Morris loves what she has: four beautiful children, a handsome surgeon husband, a stunning Upper West Side apartment, a toe hold  in the door of the downtown art scene. Her artistic ambitions, her life as she knows it, are suddenly shattered when her husband, Charles, announces that he couldn't turn down the offer of a plum job in Elliot, an affluent New Jersey suburb. The entire family needs to relocate. Lainie is heartbroken, but she dutifully stands by her husband's decision, even if that means displacing their kids and putting her own dreams once again on hold.

"Of course you will be fine" Charles says , "what a move for our family! This is what people aspire to, Lainie. More space, a more gentle life...the city has become...tougher and we need a bigger place...you will have a real studio. No more painting in the alcove or the laundry room...". Lainie has a radar for false promises. She has been in a marriage for too many years not to see the smart bait in her husband's sales pitch. She settles.  Charles wins. "He who earns the gold rules."

As she tries to re-structure her family life and regain a sense of peace for herself in the anti-septic suburban town, Lainie struggles like a fish out of water to keep up with a host of educated and attractive wives whose only responsibility in life is to stand on the sidelines of their husbands' successful careers, arrange playdates, and organize charity soirees  - until, serendipitously, she reconnects with an old frenemy turned current Elliot resident, Jess Howard.  Jess, who has always been jealous of Lainie's talent, beauty, and quiet elegance since their college years together, is pleased to demonstrate  her own hard-won social superiority by helping Lainie find her place in the community. The tide has turned in Jess' favor. She  has become the prom queen, the "it girl" who has a voice in the town, while Lainie is now the outsider. Jess will take her old rival under her protective wing, but what looks like friendship is quickly supplanted by deception and Lainie is once again set adrift in shifting tides.

With dark secrets hidden beneath the glistening surface of picture-perfect marriages and an acute portrayal of a 'Stepford Wives' suburban heaven and its hypocrisy, Between The Tides is a revelatory and trenchant tale - fans of the latest literary frenzy known as 'the marriage noir' will feel right at home as Marren's debut novel echoes themes and motifs successfully exploited by her fellow authors Meyers, Flynn and Moriarty. Technically flawless, frequently lyrical, unbearably heartbreaking. Emotionally gratifying? Not enough for my taste. 3.5 stars

***Review copy graciously offered by the Publicist in exchange for an unbiased and honest opinion.