UNDER THE JEWELED SKY by Alison McQueen: Author Interview & Excerpt

If you have a soft spot for narratives that draw you in exotic locales, moral codes and social settings of a distant time, then Under The Jeweled Sky by Alison McQueen (read my review here) is your cup of tea. A star-crossed love story set against the backdrop of the British expat circles during the mid-century political upheaval that tore India, McQueen's historical novel will be published in paperback on January 21st by Sourcebooks Landmark. The author graced my blog with the favor of an interview and a juicy excerpt. Read on and enjoy. 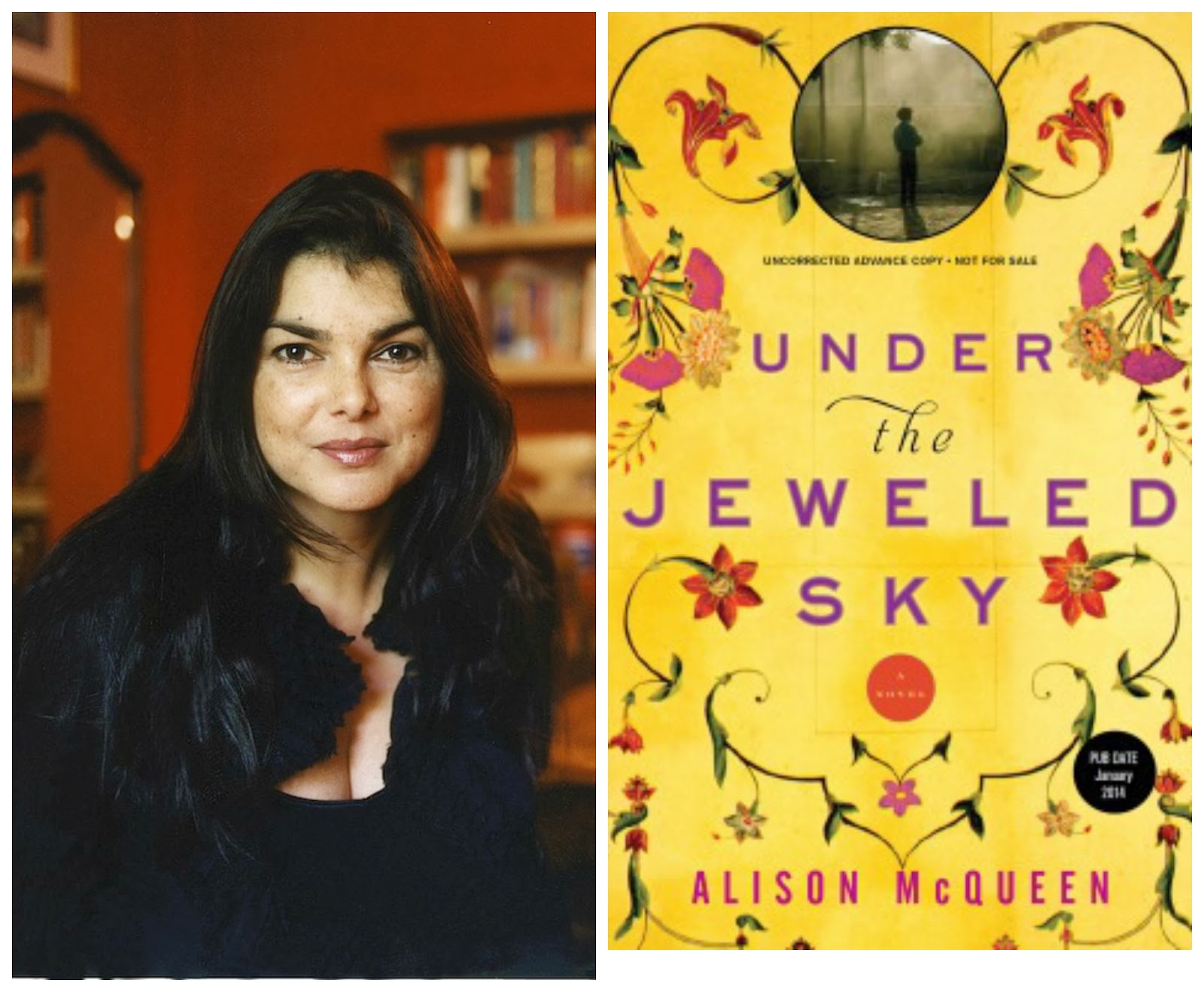 1) Alison, your latest historical novel, UNDER THE JEWELED SKY, is a heart-breaking  love story set against the historical backdrop of a country torn by political upheaval. Can you briefly introduce the players and their conflict? How did you decide to portray that particular time period and locale?
Under The Jeweled Sky is a tragic tale of love and loss set in the dying embers of the British Raj. The story unravels the fragile construct of a severely dysfunctional British family and watches its slow disintegration in the wake of World War II, the subsequent partition of India, and a scandal with terrible consequences.
The tangle of politics and diplomacy during both periods seemed like a fitting backdrop to the disordered lives of the characters, with layers of deceit and half-truths and nothing being quite what it seems.

2) Which part of the genesis of this book was the most exciting one to work on and which one the most challenging? Research the time period, the expat world building, the love story, or the character development?
The research for Under The Jeweled Sky took months. At the British National Archives, I unearthed declassified documents from the 1957 Macmillan government which would have caused a great deal of diplomatic embarrassment should they have been leaked at the time. Everything I read had been rubber-stamped Top Secret.
The archives catalogue a mire of political corruption and inaction, naming names and pointing fingers of accusation. I had started out without too much idea of what I was actually looking for, only to stumble across all manner of declassified secrets, some of which ran to hundreds of pages. Very little of it ended up in the final manuscript.
I loved creating the maharani characters. Part of the story is set in a maharaja’s palace in 1947. Although the fictional palace and its location are anonymous, I did have an inside track into life inside an Indian palace. In her twenties, my mother was hired as the private nurse to the Maharaja of Indore’s mother-in-law. She arrived there from Bombay and was shown to her quarters, an enormous suite in a grand building set across the grounds from the main palace.
A car was sent for her every morning, but she said that she preferred to walk. So off she would go, strolling through the grounds while the car followed along a few yards behind, driving at snail’s pace in case she should change her mind. Her breakfast would be served to her on a solid silver service, with a footman standing by should she want for anything.
From what she has told me, I am not sure that she handled it particularly well. She said that she didn’t want any fuss, which was quite the wrong way to go about things in a palace. There was also an incident when she was caught preparing her own boiled egg, which didn’t go down at all well. The cook was quite overcome with grief, and my mother never ventured to lift a finger again.

3) Period dramas and costume-drama-inspired-fiction have been enjoying a season of revival in recent times (see Downton Abbey). What do you think is the reason why so many readers/viewers around the world are so charmed by the past?
Today’s modern world is so fast it leaves us spinning. I was born in the sixties when kids played with fuzzy felt and everybody thought a computer was a great big room filled with reel-to-reel tape cabinets. Friends would meet in Hyde Park for softball and none of us had a cellphone. They didn’t exist. Yet we all knew where to go and nobody ever suffered for being off radar for a while.
Period drama removes all the traffic of modern living. I think that there is a little part in all of us that yearns for a slower pace, a simpler existence. With technology stripped away, there is nowhere else for the focus of a story to fall except on the minutiae of human life. We are drawn in completely, like voyeurs unable to turn their heads from the scene of an accident. Time slows down in a climate of letters, and no one dares to speak their thoughts directly. The sense of anticipation is unbearable, and that is the attraction of it. 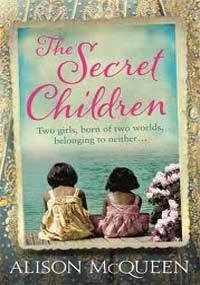 4) Your previous novel, THE SECRET CHILDREN, is set during the 1920s. In UNDER THE JEWELED SKY you chose a mid-century feel. Both stories unfold in India. What other time period and historical event would you like to explore for a future novel?
I am currently working on another novel set partially in India and touching upon a subject that remains one of the last taboos. The draft is still at an early stage so I am keeping it under my hat for the time being.
5) I have heard of authors using a story-board to outline their books.  You have a professional background in advertising, a field where this creative tool is frequently used. Did you apply any of the trick of the trade to the writing process?
Advertising is not for the faint hearted. It’s a fast, tough business and you had to learn to survive, particularly back in the 1980s when women often had to work twice as hard to prove themselves amid rampant sexism.
Copywriting is an exacting craft. Every word has to fight to be there and must earn its living, and you have to hold your work up every day and invite people to shoot it down. It taught me a great deal about brevity, but more importantly, it taught me how to receive criticism from a very young age.

Thank you so much for taking the time to answer my questions, Alison! 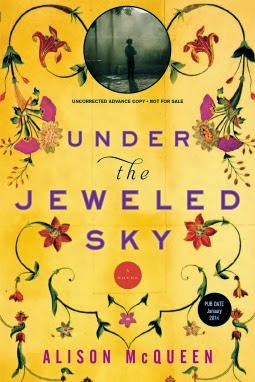 UNDER THE JEWELED SKY
by
ALISON MCQUEEN
Paperback, 408 pages
Sourcebooks Landmarks, January 21st 2014
Add it on Goodreads
Buy it on Amazon

In sharp contrast to the palace’s opulence, Jag and his father shared one small room in the servants’ quarters, a collection of uniform low--level buildings set at the very periphery of the palace compound, intended to house the imperative staff in a manner convenient to the Maharaja. Not all the servants lived within the grounds. Many relied on the ramshackle dwellings that had sprung up in haphazard fashion, sprawling across the town that had grown up nearby. Jag’s father’s hours were long and unpredictable, often taking him away for extended periods when the Maharaja traveled the country, but never when he went overseas, as he did increasingly often, particularly when there was trouble afoot. Jag’s father would not cross the black water, and this the Maharaja accepted. For a devoted Hindu, to leave India’s holy soil would cause untold offense to the gods, rendering the soul irredeemably lost. The Maharaja got around this by taking as much of his homeland with him as he could, in particular the great silver carriers that would be filled with water brought down from the sacred Mother Ganges. This way he could continue to perform his devotional ablutions without offending the deities, no matter if he was in Patna or Paris.


Jag had spent the morning at the elephant house, washing out the stalls. There was talk that the animals would soon be sold off or sent to zoos, with perhaps just one or two being retained for the sake of posterity. The contents of the pilkhana were testament to a bygone era, of elephants caparisoned with giant silver howdahs and gilded jewelry encrusted with precious and semi--precious stones, huge anklets adorning their painted feet, jeweled plaques on their foreheads. There were trappings for other animals too, the horses, camels, and bullocks used to draw the ceremonial carts. The paraphernalia in the pilkhana required constant cleaning, a routine that had continued despite the likelihood that, once the country was reborn, it might never see the light of day again. The thought of it had saddened Jag, that such ancient splendors should have to fade, but there would be no room for them in the new India, the India that would belong to its people.


Sophie’s voice broke into his thoughts.


“If you could change one thing in the whole wide world, what would it be?”